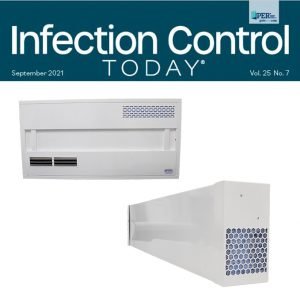 The idea behind its continuously disinfecting light-emitting diode (LED) fixture, according to officials with Energy Harness Corporation, is to draw in air, disinfect it with ultra-violet C light (UVC), and let the disinfected air back into the room. Because the product the Active Airflow LED fixture is mounted on the ceiling, UVC disinfection of pathogens can be done even in occupied rooms, the company claims.

In a company press release, Michael Fischer, president of Energy Harness Corporation, said that one of the best ways to combat airborne viruses is to “continuously recycle individual room air while safely treating it with UVC radiation.”

The device was tested at a nationally recognized testing laboratory (NRTL) called Intertek Laboratories. (The Occupational Safety and Health Administration uses NRTLs as part of its approval process.)

Energy Harness Corporation said in the press release that its product “was shown to be 99.9% effective in eliminating airborne pathogens. Further laboratory testing directly on the SARS-CoV-2 virus has shown the LED technology produced in the Active Airflow fixture showed a 99.998% inactivation of the virus within one second. A virus reduction rate of 99.999% is the maximum sensitivity that the testing mechanism could measure.”

Peter Lehrer, Energy Harness Corporation’s vice president for project development, said in the press release that “to know that our technology maxed out the testing equipment, that’s a pretty exciting moment. It says that we’ve got the ultimate virus killer on our hands.”